This blog is relocating

In a lot of ways, web design is not unlike heraldry. Shields and websites are graphical representations of individuals and organizations. Both have a unique code or language (HTML/CSS and Blazon) which, when interpreted either by a machine (internet browser) or a heraldic artist, renders a visual design. And both require a strong eye for aesthetics as well as a technical expertise to successfully develop.

In addition to my heraldry hobby I do graphic and web design. Because of the similarities, I've decided to conjoin my two extra-vocational identities on one website. From now on, the Maine Heraldry blog can be found at my domain, www.jeremyhammond.net.

The direct link for the blog is www.jeremyhammond.net/maineheraldryblog.

I hope you'll follow me at the new location!
Posted by Jeremy at 11:45 PM No comments:

Email ThisBlogThis!Share to TwitterShare to FacebookShare to Pinterest
Labels: Meta

While not strictly heraldry, I did find a recent Wooden Boat Magazine (based out of Maine) posting on Facebook pretty interesting. 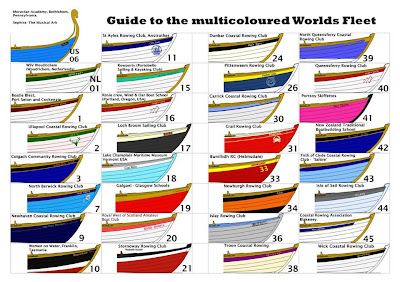 These are the vessels which will be competing in the St. Ayles Skiff World Championship Ullapool, a wooden boat race in Scotland. I appreciate the simplistic use of color for identification and of course see a resemblance to heraldry in terms of using vibrant visual markers to identify individuals or groups - or in this case rowing clubs.

It also reminds me of the use of lobster buoys here in Maine. Every lobster-fisherman has a buoy to mark each trap left behind which is identifiable by unique color and stripe patterns. I believe the patterns are even registered with the State. (Below are the buoys of my grandfather hanging from my deck railing, white with crossing green and orange stripes.) 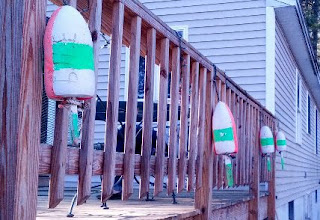 I even devised arms which I attributed to my grandfather based on the buoy design. My grandfather did not live long enough to see these arms, and they aren't in use by my family. They exist mostly in my imagination, but I'm proud of the design nonetheless. Lobster-fisherman even post the same buoy on their boat, flying it as sort of a flag.

Posted by Jeremy at 8:18 AM No comments:

I'm very pleased to share the results of my work with the City of Bath's "Flag Committee." Much of the design rationale was recently published in The Forecaster, a local paper.

[Jeremy Hammond] looked for sources of heraldry and flags from early Bath history, he said, noting that much of the design is based on the coat of arms of the city of Bath in Somerset, England. The image was also inspired by the coat of arms of George Popham, the namesake of the colony where the first European ship built in New England, the Virginia, was constructed not far from Bath in 1607-1608.

The two blue stripes in the design allude to Merrymeeting Bay and the Kennebec River, the two major bodies of water around Bath, Hammond said.

A square-rigged ship appears on the Bath Police Department patch, the weathervane of City Hall, the city seal and the Morse High School logo, he said, explaining the rationale behind the vessel he incorporated into the design.

The City Council is expected to vote on a resolution to adopt the flag this Wednesday, July 3.
Posted by Jeremy at 8:28 AM No comments:

The evolution of the arms of Morse High School (Bath)

This blog began as a thread I started in the American Heraldry Society forum. In it, I began researching the coat of arms featured on the graduation program of Morse High School which features a coat of arms.

I had originally assumed that - like much of modern heraldry, especially in America - it was an arbitrary design by non-heraldry experts with little history. However, the design features a crest which isn't aligned with the nautical themes of the school: two battle axes in saltire, behind a wreath of some sort. This prompted me to dig deeper into the design rationale.

I reached out to the Alumni Association, which is incidentally one of the oldest and the largest association of its kind in the country, and made contact with Troy Cunningham, who has served as president of the association and is a Morse High history enthusiast. He shared with me these scanned images of graduation programs. The earliest use of the arms featuring a ship appeared in 1966. Another program from 1963 bears a very different coat of arms.

After a little more digging, it appears the school used the arms of Charles W. Morse, a notorious businessman in the early 20th century who gifted the original school building (which later burned down). The blazon of those arms are: Argent a battle axe palewise Gules between three pellets.

Cunningham also shared with me a seal for the Morse Society, a genealogical group begun in the 19th century, which features the same crest.

After some brief genealogical research - mostly just a flurry of emails - I've yet to determine if Charles W. Morse was a descendant of the original armiger, but it's clear he used the coat of arms whether entitled to or not.

When presenting my findings with the American Heraldry Society, I went ahead and illustrated the coat of arms of Morse High School in a manner consistent with heraldic norms (omitting the clouds on the Argent background, and using blue as the ships tincture).

Posted by Jeremy at 8:54 AM No comments:

I've been distracted by life in general, but also some other heraldry projects including International Heraldry Day and a Facebook page dedicated to American Heraldry. I haven't forgotten about this small side project, though. For the sake of posting something, here are a couple examples of arms of religious institutions in Maine.

This ancient papal insignia shows the crossed keys of Saint Peter and the pilgrim's canopy - theombrellino. For the new Lewiston Basilica, green was selected to represent both Saint Peter and the State of Maine. On this field appears the crook of a crozier ( a pastoral staff; a processional staff with the head in the form of a shepherd's crook) representing Saint Peter, The first Bishop of Rome.


The blue field on the right is in honor of Saint Paul - Apostle to the Gentiles and inspired writer and teacher. The deep blue represents the Blessed Virgin Mary, Patroness of the Diocese of Portland under her title of the Immaculate Conception. Blue is also a symbol of the truth of the Gospel that Saint Paul taught in his Letters. The book represents the Latin version of the Bible opened to Saint Paul's letter to the Romans which begins with the words: Ad Romanos Caput Primum (" To the Romans, First Chapter.") At the base is a smaller gold field. Gold is a symbol of wisdom and truth. On it appears the Fleur-de-Lys - the oldest image for Mary, Mother of the Church. Known as the Lily of Mary, It was selected for two other reasons: the great French Canadian heritage of the people who built the Church of Saints Peter and Paul and, when depicted half silver and half black, is also one of the most important emblems of the Order of the Preachers of Saint Dominic.

Posted by Jeremy at 8:09 AM No comments:

Gentlemen of the Road Tour

This past Saturday British folk rock band, Mumford and Sons held their "Gentlemen of the Road" stopover music festival in Portland. With 16,000 people in attendance, it was one of the largest concerts Maine has seen. It might have been the biggest one in Portland ever, as I don't think they have any larger venues than Eastern Prom.

At any rate, the stopover tour branding features 19th and early 20th century themes, with the primary logo being a mustached man in a top hat above two pistols in saltire. Hung around the park were several shield style logos, including the one on the left for the Portland stopover. On the Gentlemen of the Road website, they have a shield-style logo for every city they're stopping at.

It's obviously not the best heraldry - if heraldry at all. But they are attractive logos and it was an amazing show worthy of note.

Also to their credit, there was one shield that I neglected to get a photo of which was simply Gules, two pistols in saltire Or. Below is photo of a banner that was draped behind the band, but above that and out of the picture was the shield featuring the same arms.

Email ThisBlogThis!Share to TwitterShare to FacebookShare to Pinterest
Labels: Modern

I was told recently that an obvious first step for this blog would have been writing about the arms of the State of Maine. That would make sense, except that I don't believe I could do any better than the article published by Joseph McMillan, current President of the American Heraldry Society. In fact, AHS has quite a lot of wonderful articles on historical heraldry in the United States, including the arms of several states and Presidents.


The coat of arms of Maine was adopted by a law of June 9, 1820, three months after Maine's admission to statehood. The law described the arms as "A Shield, argent, charged with a Pine Tree, a Moose-Deer, at the foot of it, recumbent. Supporters; on dexter side, an Husbandman, resting on a scythe; on sinister side, a Seaman, resting on an anchor. In the foreground, representing sea & land, & under the Shield, the name of the State, in large Roman capitals, to wit MAINE. The whole surmounted by a Crest, the North Star. The Motto, in small Roman capitals, in a label interposed between the Shield & Crest, viz. DIRIGO."

It's worth noting that the flag of the state of Maine and all modern renditions of the arms fixed by the legislature in 1919 are not accurately emblazoned. The field should be Argent, not a landscape.
Posted by Jeremy at 5:41 AM 1 comment:

features my explorations in modern and contemporary uses of heraldry in the great state of Maine.
I am a member of the American Heraldry Society and a Fellow of the International Association of Amateur Heralds. I've lived in Maine and have been a heraldry enthusiast most of my life.
-Jeremy Hammond